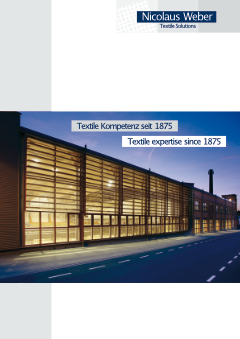 Weaving to the highest standards is our vocation – and that has not changed since 1875.

2013 – today The introduction of air-jet looms with a maximum nominal width of 360cm has added to our flexibility and improved lead times.

2005  After a fire in 2003 Nicolaus Weber GmbH & Co. KG resumed its activities with new machinery in rebuilt and extended premises. The family-business employs around 30 people and is currently run by Claus-Michael Weber, representing the fifth generation to do so. High-tech machinery enables the company to produce technical textiles for almost any sector. The spectrum of raw materials ranges from natural fibres to almost all of the synthetic fibres with the exception of glass. The yarns used are spun, multifilament and monofilament. The food, clothing, electronics and automobile industries are only some of the areas in which, amongst others, wet- and dry-filtration feature our products; likewise with our support cloths and coating base fabrics.

2003 A disastrous fire in August destroys all the machinery and the weaving shed is burnt out. Claus-Michael Weber stays true to the company’s philosophy “Respect for tradition, belief in the future” and decides to rebuild the Fulda works.

1983 – 1998 The focus is more and more on producing for technical customers. The range of products increases sharply. Alongside natural-fibre cloths, special fibres such as aramide are introduced.

1983 Claus-Michael Weber starts to work for the family-company in the buying department under the leadership of his father Claus Weber. The first wide looms are installed and can weave up to 5.20mtr in width. At the same time the company shifts the emphasis of its products from handicraft fabrics to technical materials. As technical customers increase, so the main sales area grows to include the whole of Germany and Europe.

1974 – 1980 The company replaces its automatic looms with projectile looms from Sulzer.

1969 On October 2nd Franz Weber dies, followed 18 days later by Otto Weber. Their life’s work is handed over to their sons Josef Weber (son of Otto) and Claus Weber (son of Franz) who take the company into its fourth generation.

1960 Previous investment soon pays off. The newly-installed machines are fully stretched and demand soon outstrips capacity, so that Nicolaus Weber GmbH & Co. KG starts giving work to other weavers. The added freight costs make this commercially less attractive, so the company opts for further extension of its own premises. Otto Weber (son of Lothar) and Franz Weber (son of Eugen), now the firm’s third-generation owners, found a stand-alone subsidiary.

1950 – 1959 The premises are extended to facilitate spinning, twisting, beaming and weaving. In all departments the company invests in modern machines.

1948 The currency reform of June 20th sees the sudden reemergence of a market. The basis is laid for the development of what becomes known as the “German economic miracle”. Business recovers and investment resumes.

1940 – 1945 On February 20th 1940 senior manager Eugen Weber dies. The war severely hampers the company: 50 to 60 percent of the personnel are transferred to essential industries. Twice during this time the company narrowly avoids closure. Besides the outflow of employees the company sees its remaining foreign commercial links disappear. The company has to radically change its product focus and from now on produces totally new kinds of cloth, such as shoe linings, porous, coated and milled fabrics for technical end-uses, as well as sailcloth-types, reinforcement and filter cloths. Forced in the end to close down completely, the company starts up again in May 1945.

1927 – 1929 The growing world economic crisis has not yet affected the family business. The company’s land increases through the purchase of an adjacent plot and agencies are set up worldwide. New finishing machines are added such as stenters, driers, calanders and jigs, as well as modern looms.

1922 Export now accounts for the majority of production, since local purchasing ability is fading due to steadily increasing inflation. Thanks to rebuilding and reconstruction, plus an enlarged and strengthened array of equipment, Nicolaus Weber GmbH & Co. KG succeeds in extending its product range. More functions are added: spinning, bleaching, coating, carpentry and metal workshop.

1918 At the end of World War I Otto and Franz Weber, the grandchildren of the company’s founder, join in with the running of the firm. Together with their fathers they extend the company’s premises, invest in technical equipment and electricity is put in.

1907 After the death of the company’s founder Nicolaus Weber on May 26th, his sons Lothar and Eugen Weber take over the leadership of the company.

1875 On March 1st Nicolaus Weber (1824 – 1907) founds Nicolaus Weber GmbH & Co. KG with four hand looms and five employees. Trade is based on the production of canvas and embroidery cloth.